We don’t have any images of this aircraft.

1960 – Crashed 20 June 1960 at La Guadaloupe, Quebec, while returning from the Dunpht airstrip after completing the budworm operation in New Brunswick. St. Guadaloupe is on the direct flight line to Drummondville, Montreal and Cartierville Airport, including Tingwick where CF-IMS crashed during the same weather pattern on the same day. Pilot Bertrand W. Foite did not incur any injuries, and the aircraft was marked as “damaged”. From the Department of Transport accident card: “Continued VFR into unfavourable weather. While doing a precautionary landing after the pilot became unsure of his position the aircraft nosed down. The empennage [tail assembly] touched some telephone wires then settled back.” 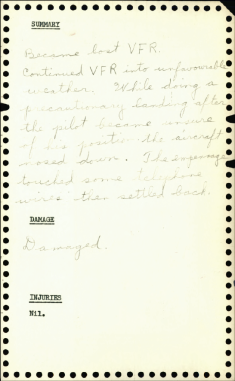 1962 – No records, but very likely flew in NB. 1963 – Crashed on takeoff, St. Jovite, Quebec, 2 May 1963, while practicing for spraying. The Department of Transport (DOT) accident card indicates that pilot Jim V. Lassel was conducting a flight test out of the St. Jovite airport, the Wheeler Airlines base of operations. He received “very minor” injuries. The cause was listed as “Improper take-off technique.” “Pilot attempted to take-off with an airspeed insufficient to counteract the torque being developed by the engine and was unable to maintain complete control of [the] aircraft. The aircraft struck trees and then struck the ground heavily.” DOT also issued an accident report, below. 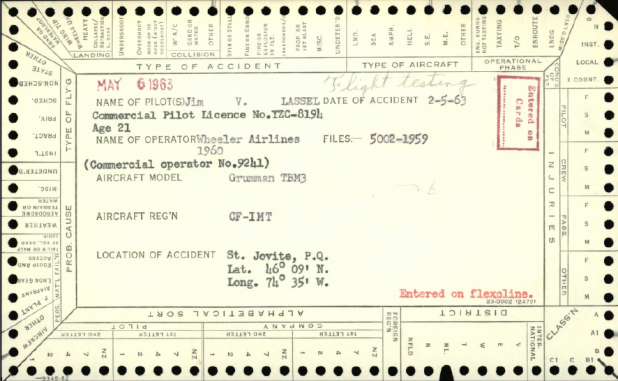