1976– Pilots Maike and Stuart. Crashed 29 May 1976 AM. TBM #615 FKCG piloted by L. Maike and owned by Conair Aviation (out of Sussex Airstrip) developed engine difficulties (fuel management) while spraying on block #1659 and crashed on a rural road north of Moncton near Highway 126. The pilot suffered no injuries but the aircraft was a complete write-off.

Storage and Transport of #615

1976-1977 – The damaged airframe was stored from October 1976 over the winter at FPL in Fredericton. It was airlifted to Halifax, NS, in September 1977, and then loaded on the deck of a vessel bound for the UK. 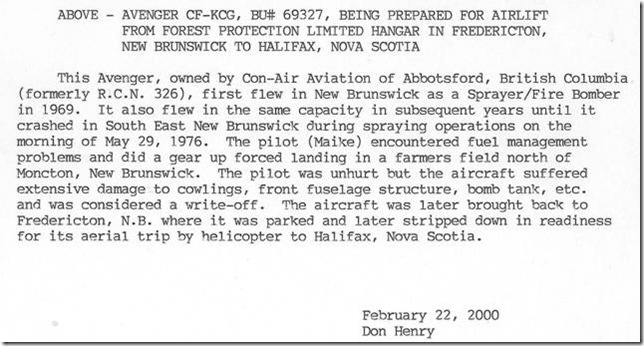 [I have not been able to find the source of this article. – C. Adam]

In late 1976 I was seconded to the Aviation Claims department of a major London Insurance Broker because a backlog had occurred, whilst checking through the files I happened upon a file for Conair Aviation who operated, amongst other things, a small fleet of Grumman Avengers in a water bombing role.

This aircraft CF-KCG had had a fuel management problem and made wheels up landing on a road near Moncton New Brunswick, from the pictures in the file it looked in a reasonable state, however the local Fire Department had offered to take the airframe and use it for fire practice.

After a chat with the loss adjuster in Canada it was agreed that I should let the IWM in London look over the file and pictures.

I met with Ted Inman the then keeper of exhibits at Duxford who was to say over the moon about the possibility of getting a fairly intact TBM-3E Avenger and agreed to make an offer just over the price that the Fire Department had made, this he did and we then proceeded to get the Underwriters agreement to this amount.

We now had an aircraft in Canada in early winter and again the loss adjuster an old Royal Canadian Navy man (Mac McCubbin) came to our rescue, he talked to Woodlands Aviation in a local airfield (Fredericton) and the owner (Mr McCarty) to have the aircraft under cover (tarpaulin) over the winter.

Spring came and once again our local adjuster went back to the field to check on the aircraft only to be told that if he took the Avenger away there was a Boeing Kaydet that could go with it.

Fortunately our navy man still had a few friends in the RN and made arrangements for the aircraft to be moved to Halifax Nova Scotia and subsequently onto a RN supply ship for the journey to Portsmouth for onward travel to Duxford where it now resides.

There was a deal of work to remove the Water Bombing gear and replace it with original RCN gear.

It is with regret that the pictures from the original claim file mysteriously disappeared, however I do have one picture of a wingless Avenger sitting on its own gear at IWM Duxford.

This airframe has now been hung from the roof of the American Hanger and is painted to represent the one flown by President George Bush when, as a Lieutenant, he served with the US Navy in the Pacific during 1944.  It now shows the serial 46214/X-3.