I do know this TBM was considered as one of 10 TBM’s (in the USDA Forest Service inventory) for conversion into an airtanker in 1957, but it was not chosen because they came up with another aircraft with lower time.  It later was sold in a 1957 surplus sale (see attached photo).  I have no record of it  being used as an air tanker in the US.  In the 1961 FAA records … N7411C #53-351 is listed for “Agricultural and Pest Control” use.  It looks like is was a sprayer here is the USA prior to making its way to Canada.

Miramichi Air Service was operated by Andrew Retfalvy. In 1970, he purchased a property known as the Douglastown Airfield (now closed) near the city of Miramichi, from James R. Seel, who operated a licensed air service with this TBM, CF-ZTA.

Aerial spray program – NB
1971, 1972 – Pilot Retfalvy. 1973 – Pilot McBride.
1974 – Crashed 21 July 1974, Sevogle NB, after hitting the slipstream of the preceding aircraft on a turn. Pilot Merrill McBride was killed. According to the Department of Transport accident card, “the aircraft dived to the ground at a steep angle during the turn at the end of a spray run.” 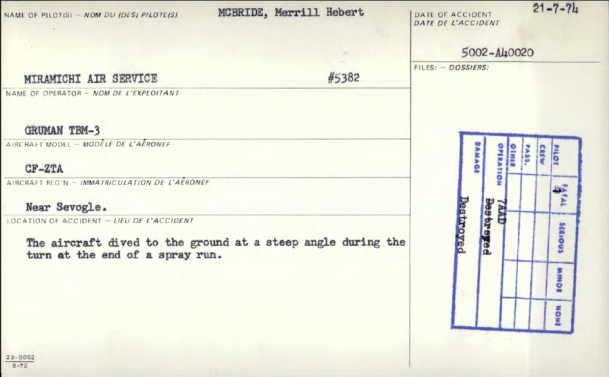 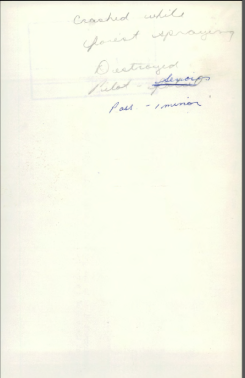