Aerial Spray Program – NB
1974 – FPL purchased #A12 in late 1974 for $26,820 from Johnson Flying Service of Missoula, Montana, then dry leased it from Evergreen Air Services of Montreal. 1975 – Pilots Davis and Foote. In late June of 1975, FPL provided GLEK and two other TBMs to the NB Department of Natural Resources for fire bombing. 1976 – Dry leased from Evergreen but operated by FPL. Pilot Kirschke. 1977 – Pilot Kirschke.

1998 – Crashed 16 August 1998 en route to a demonstration in Woodstock and was completely destroyed. The pilot, B. LeBlanc, walked away from the accident with only minor injuries and was back flying in a spare aircraft (C-GFPM) in five days. The Transportation Safety Board report cited the cause of the crash as “unprecedented mechanical failure.”

The Atlantic Canada Aviation Museum (ACAM, Goffs, NS) acquired #14 in 1998. In August of 1998 a road was built into the crash site and the wreck hauled out. It was briefly stored at FPL before being hauled to John Mossman’s woodlot for storage. These images come from the FPL files and Don Henry’s collection.

TBM #14 at the crash site, and constructing an access road, August 1998 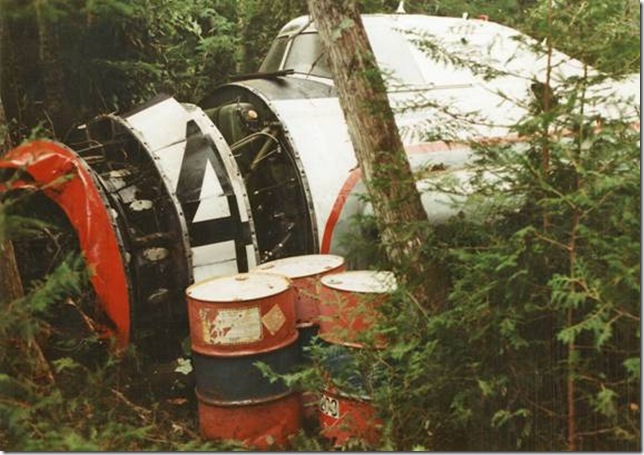 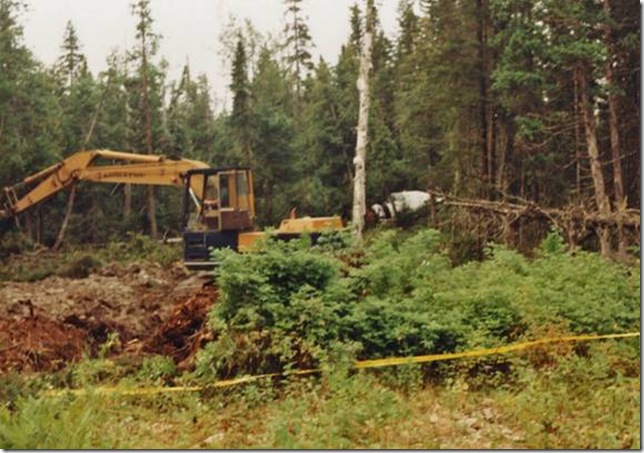 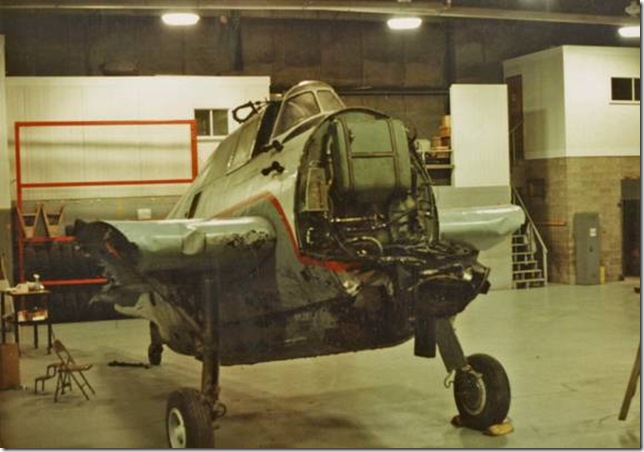 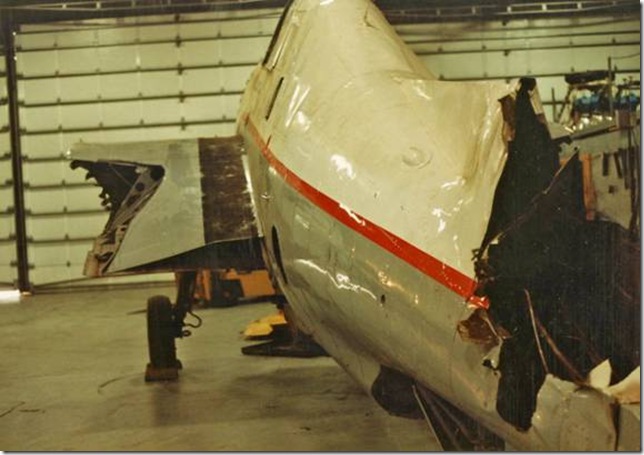 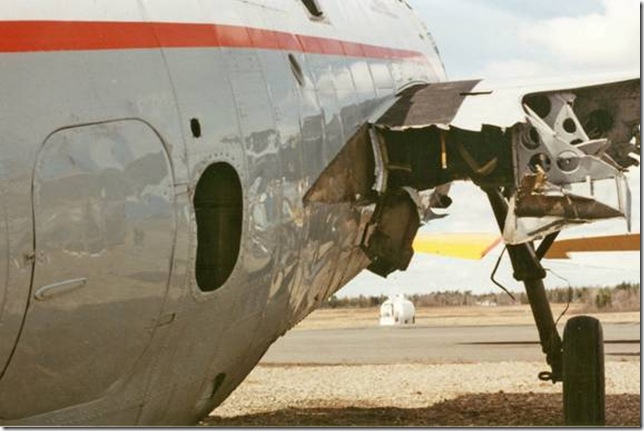 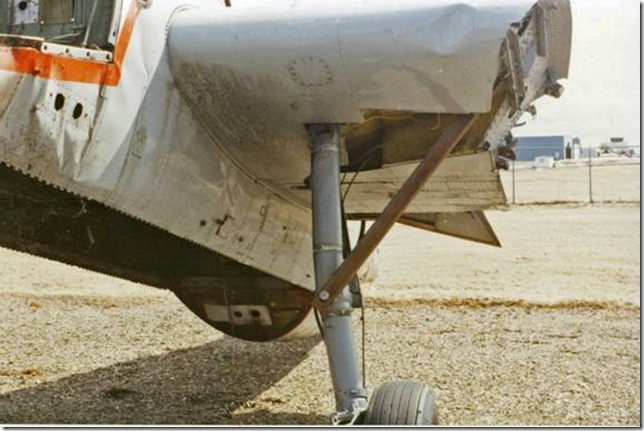 1999-2004 The fuselage was donated to the Woodmen’s Museum in 2001 through FPL via the Atlantic Canada Aviation Museum (Halifax, NS), which had acquired it in 1998. Volunteers transported the fuselage from Mossman’s woodlot on 17 May, 2002. The Woodmen’s Museum took delivery of the fuselage on that day, with the help of RS Coughlan Ltd. transport business and volunteers. Restoration took place over the next two years. The dedication ceremony and banquet took place at Boiestown on 12 June, 2004. The avenger is on display at the side of Highway 8 during the summer, and is one of the most photographed Avengers in eastern Canada.

Transporting the fuselage from Mossman’s woodlot to FPL, 17 May 2002 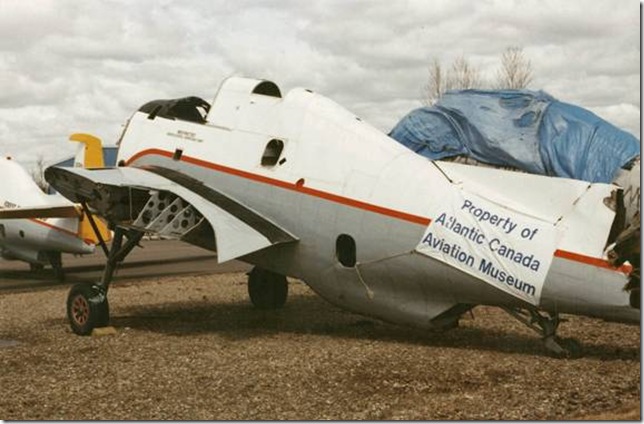 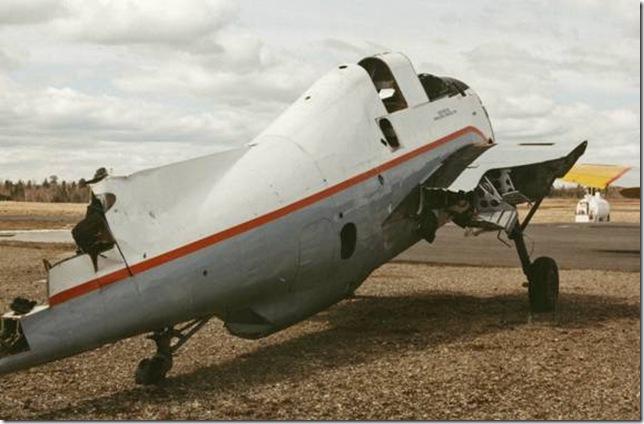 See HERE for all the ACAM newsletters. 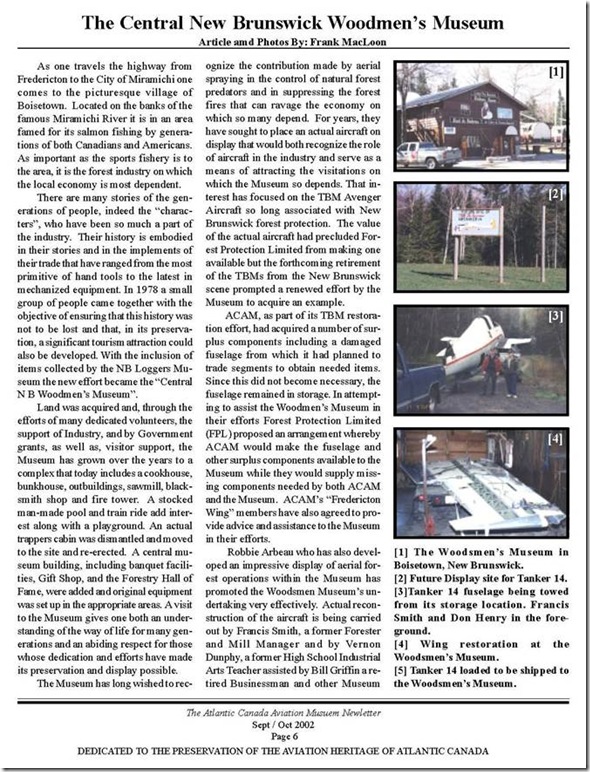 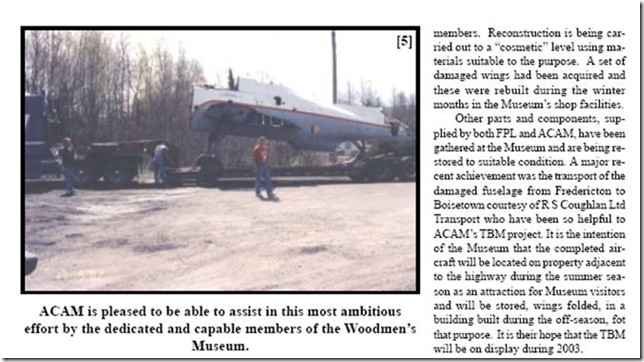